Discover the Gardens of Italy

The Gardens of Italy

DAY ONE – ARRIVAL IN ROME

There are 2 airports for Rome, Fiumicino (Leonardo da Vinci) and Ciampino. Rome Fiumicino (Airport code: FCO) is the main airport and it is more than likely that you will be flying into this one rather than Ciampino (which is smaller and mainly does domestic flights).

Getting to Rome city centre

Private car – Usually takes about 45 – 60 minutes, this is the most comfortable and stress-free way to be picked up and dropped off at your hotel.

Train – takes about 32 minutes. Trains leaves every half an hour and it will run every 15 minutes at peak times. Follow signs for Treni for the non-stop ‘Leonardo express’ to Stazione Termini.

There is also the local train, takes about 27 – 47 minutes and leaves every 15 minutes. The local train will stop at Roma-Trastevere Station, Roma Ostiense, Roma Tuscolana and Roma Tiburtina.

Bus – taking around 35 minutes and run every 30 – 50 minutes. There is the chance to be able to purchase tickets in advance (online or from Tabbachi and newsstands) they are usually cheaper by a couple €s than buying the tickets on board.

After settling into your hotel, it would be a great chance to introduce yourself to Rome with a gentle introductory tour of the city.

Introducing Rome on The Grand Tour

Start at the Piazza di Spagna and the Spanish Steps. We may pay a visit to Keats and Shelley house, a museum in the house where the Romantic English poet Keats died in 1821.

We will walk up the steps to enjoy the view of the city and stroll to the Pincio, where we will be able to sport the key landmarks of Rome.

We will walk to Piazza Popolo and pay a visit to Caravaggio’s Paintings in Santa Maria del Popolo. After a stroll along Via del Corso to enjoy the atmosphere and maybe have a gelato or a Pompi Tiramisu, we will end our tour by the Piazza di Spagna.

For the first full day in Rome.

The Borghese Gallery, known as the Queen of the Private Art Collections. An exceptional collection of art from the world-famous masters, housed in a Villa that was built in the 1600s, the interior marks is the perfect setting.

A unique XVII century collection of Renaissance and Baroque painting, with Ancient Roman and modern sculptures that were originally created by the powerful Cardinal Scipione Borghese. Starting from the top floor, admiring paintings by Raphael, Titian, Botticelli and Perugino, as well as Roman and modern sculptures and coffins. On the first floor discover the stories behind Bernini’s Statues and admire the six Caravaggio Masterpieces, owned by the Cardinal, who did not hesitate to blackmail the painter Cavalier D’Arpino to acquire two of them in the XVII century. Afterwards, head off to the gardens which surround the Casino Borghese, heading towards Via Veneto.

In the afternoon head to Aventine Hill to visit the beautiful Rose garden of Rome.

Once a Jewish cemetery, it was presented to the city in the 12th century. The layout of the garden pays tribute to its past history, with paths that form Jewish symbols. There is an extensive collection of Roses, with competition entries and new breeds to be found in the garden. It is a great experience for the senses, with the beautiful colours and fresh smell of the Roses. (only open for the flowering seasons: late April to late June, cost: €5)

The Gardens of the Vatican City, was once know as the Vatican Gardens in Vatican City. They are the private gardens and parks and have been a quite place for the popes since 1279. Nicholas III moved his residence back to the Vatican from Lateran Palace, he built walls to protect his residence, where he had an orchards, lawns and gardens. The Vatican gardens are now much larger with more plants, it covers about 44 hectares of Vatican City. (Visits are with official Vatican guides). 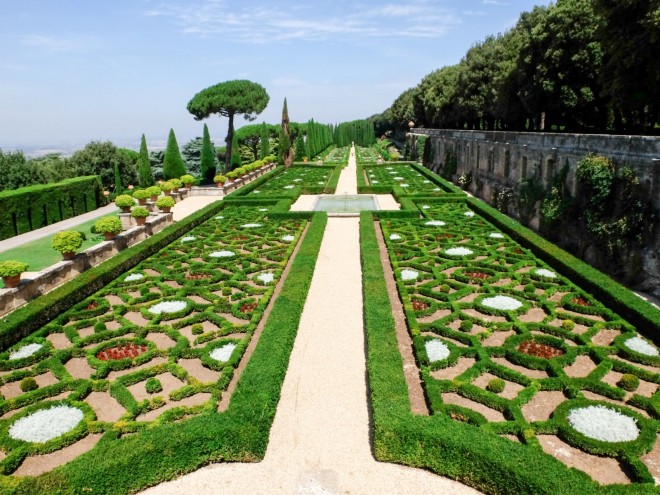 Also not to miss the Colosseum and the Vatican Museums.

Outside of Rome there is a the Tivoli Villas, an opportunity not to be missed! With a pick up from Rome and your own private guide, discover this amazing place.

Driving from Rome through the Roman countryside, along the Via Tiburtina, you will approach the hilltop town of Tivoli. An ancient Tibur, a 3000 year old city and former enemy of Rome. Discover the Beauty of this land and the gems of Hadrian’s Villa and Villa D’Este.

First stop is a 2 hour tour of Hadrian’s Villa, probably the most marvellous building that the human mind has ever conceived. Hadrian’s Villa is like a reproduction of the Emperors world’s and memories in a complex that is as big as a mid-sized city. Then time for lunch in the restaurant La Sibilla, just next to the ancient Roman temples and on top of the cliffs, with dramatic views of the waterfall of Tivoli. In the afternoon we will go for a 2 hour stroll in the beautiful gardens of Villa D’Este, a magnificent late Renaissance villa built by the architect Pirro Ligorio for the Cardinal D’Este, Lucretia Borgia’s son. Considered to be one of the most beautiful parks of all the entire Italian Renaissance. Both villas are UNESCO World Heritage sites and a visit to Rome is not complete without touring these authentic gems. Hotel pick up and drop off from your hotel in Rome and an expert local guide that will bring the stories and the lives of these great personalities to life.

Leaving Rome to travel to Viterbo, stopping at Villa Lante in Bagnaia.

Guided tour of Villa Lante in Bagnaia near to Viterbo.

The gardens are a breathtaking creation from the days of the Italian Renaissance, featuring cascades, fountains and grottoes. Started in 1564, the gardens weren’t finished until 1587.

The most impressive feature is the massive stone dining table. A trough of water runs through the center of the table, meant to chill wine. Later on we will visit briefly the center of Viterbo before heading to Civita di Bagnoregio, the dying city, and then the Gardens of BOMARZO the most amazing renaissance garden ever. Build as a token of love for the beautiful Giulia Farnese by her husband the noble Vicino Orsini, the architect Pirro Ligorio created a journey of symbols, stone monsters, tombs, ruins and riddles in which the soul gets lost to find itself again thought the enlighten power of eternal Love.

A fine example of Mannerist architecture, Palazzo Farnese is a splendid place to visit.

Designed by Vignola to be a summer residence for Cardinal Alessandro Farnese, a cardinal at the tender age of 14 years old because his grandfather was pope Paul III. The magnificent and elegant building has 365 rooms on several floors, Farnese was able to engage the most important painters to decorate his home.

The Palazzo looms over the small town of Caprarola and is unusual due to its pentagonal shape.

The gardens are a great example of an Italian garden, with fountains and statues that round off the tour of Palazzo Farnese.

Start the morning with a walking tour of Florence.

Visit all the highlights of Florence with this walking tour. Including entrances to Uffizi and the Accademia galleries.

On this tour, you will be able to see the following sculptures outside the Vecchio Palace; Ammanati’s controversial ‘Neptune Fountain’ (Michaelangelo said ‘what a lovely piece of marble you have ruined!’ upon seeing this work), Bandinelli’s ‘Hercules and Cacus’ and ‘The Rape of the Sabine Women’ by Giambologna. From the central piazza, we will walk the short distance to pass the Ponte Vecchio – the only bridge to survive the German retreat from the region during WW2.

Finishing the tour with the Accademia gallery, with the famous ‘David’ by Michelangelo.

There is a high-speed train that travels directly from Florence to Venice or (we recommend) a private car and driver (less stressful and a gentle drive through the Tuscan countryside).

After settling into your hotel, enjoy a delightful introductory tour of Venice.

Venice is a unique and famous city. Marvel at the amazing sites and soak in the atmosphere with your own private guide, showing you the most famous parts of the city.

This 2 hour walking tour will introduce you to the most important monuments. The tour includes seeing the Doge’s Palace, decorated with rose and pink marble and the Bridge of Sighs, that links the Palace with the prison section. Its windows allowed the prisoners to see the outside world for the last time before execution. Next, St Mark’s Basilica, called the Golden Cathedral, crowned with 5 huge domes, and St Mark’s Square, the symbol of Venice. Discover more of Venice with your local guide and visit the Doge’s Palace and St Mark’s Basilica.

With your private guide, learn about the history of Doge’s Palace, with two magnificent Gothic facades in white Istrian stone and pink Veronese marble. Learn about the Bridge of Sighs that links the Palace to the prison, named after the sighs of the prisoners being led to the dungeons. St. Mark’s Basilica, called the golden cathedral, crowned with five huge domes and St. Mark’s Square, the symbol of Venice. Founded in the 9th Century for a place to safely house St Mark’s body, it is decorated with luminous mosaics and marble from Syria, Egypt and Palestine. An unforgettable sight.

The Basilica di Santa Maria Gloriosa dei Frari, usually called by Venetians “Frari”, Friars, is one of the largest Churches of Venice build in the 13th Century its distinctive bricks façade was completed in 1338.

The wide and tall naves, the amazing altar painting with the Assumption of Mary by Titian and the Tombs of the Great Venetians, Tiziano and Canova, make this Church one of the most beautiful of the entire city, and a perfect location for Concerts.Santa Maria Salute is one of Venice’s most pictured landmarks. Standing on the final stretch of the Grand Canal, it is an exquisite sight. Built between 1631 and 1681, it was dedicated to the Madonna in gratitude for the end of the Plague. The church is an unusual shape and still is a very striking image today.

We are able to arrange a private water taxi service from your hotel to Venice Airport.

If you are interested in this itinerary, get in touch with us and we can customise your trip based on what you like and want to see!